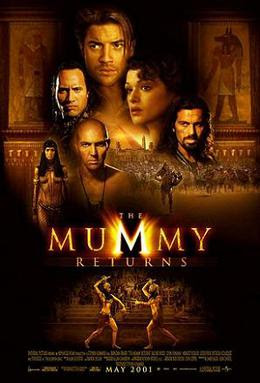 Why aren't Brendan Fraser, Rachel Weiss and Oded Fehr in EVERY movie? Patricia Velasquez and Arnold Vosloo can come along, too. And heck, why leave out John Hannah and Kevin J. O'Connor?

One thing you gotta give up for The Mummy Returns: the fight scenes are fan-bleeding-tastic. And I'm a sucker of how Sommers stages his stuff. That fight scene in the O'Connell house is set up BEAUTIFUL.

"Then we'll kill you, and take the box anyway."

Come on! If you're not on board with that, go down to the community center and buy yourself some bingo cards. Get one of those stamper things so you can run four or five cards at the same time.

Because then there's a totally awesome fight scene, and then machine guns go off, and capes swirl, and cars go zoom zoom crash roar, and more machine guns, and mummies and guys getting ratchetted backwards into pools of fire, and explosions, and Rachel Weiss and come on.

Look, I know what you're going to say. You're going to say that The Mummy Returns is insipid. Stupid. Derivative. Way too complicated for its own good (WHY do they make a big deal about somebody opening the chest so the Mummy can suck them dry? Good grief). Stupid. Tedious. Full of fake-looking CGI effects. Featuring bad astronomy. Stupid. I can't argue with any of that. And yet I am helpless before this film. I LOVE this film. I just love watching Fraser and Weiss and Fehr banter and throw punches and shoot things and scream a lot. They're all so very charming.

And they do a LOT. A lot happens in this film. And while that kind of LOOKS like a problem, I think it's not really the problem. I've spoken about the films of Tsui Hark and how they seem so incredibly stuffed full of stuff, and that's a good thing. There, it works. Here, Sommers does too much.

Part of the problem is the large amount of NEEDLESS stuff. The story itself isn't all that complicated, but there's all these subplots and goofy things taking up your screen time. Compare it with Peking Opera Blues. I've seen that film twenty times or more, but I still don't think I could relate the plot to you. I don't really know what it's about, but I do know that it's totally awesome.

On the other hand, it doesn't feature Oded Fehr with a hawk: That bit always cracks me up. Half way through the film, and Fehr's already several times cooler than anyone you know, and he just sort of casually turns around and says, "Oh yeah, AND I have this trained hawk that comes whenever I call."

That's pimp. Oded Fehr is like the Ancient Guardian Pimp-Master Supreme. And he's got a few thousand bad-ass characters that can show up and just ride around Egypt for a few days. With, you know, swords and turbans and trained hawks (named Horus -- bet there's a lot of hawks named Horus over Egypt-land). That's just how the Pimp-Master Supreme rolls.

It's like Superman mentioning, just in passing, as he's rattling off all his super-powers, that he's also a cordon blue chef. Pimp.

I know, I know. You could cut an hour out of this movie and miss none of it. Especially if it was the hour featuring that kid.

(WHY do people put children in their movies? It's a mystery.)

Damn, but this is scattered. I haven't even gotten to the pygmy mummies swinging on vines.

Okay, I don't know if anyone else in the world has ever noticed this, but like I say, I LOVE this movie. So there's this guy who shows up right at the start. He's just some mook in a red turban, pointing a gun at the sub-bad guys (the Cockney adventurers (who I would TOTALLY go see a movie about, damn that's a good idea Corey)). THAT GUY shows up again and again throughout the movie, and every time he just keeps avoiding death. He chucks a knife at O'Connell that our hero catches and flings back, and THAT GUY leans aside and lets the knife take his buddy in the chest. He empties his Luger at O'Connell and then ducks the return fire AGAIN.

This goes on for the whole move. THAT GUY keeps avoiding certain death again and again, until at last he is unable to cheat it any longer. But I'm pretty sure he's the very last red-turban mook to go down. Go watch it, you'll see. He's got no lines, but he's one of my favourite characters in the whole picture.

And he's one of the things that redeems this hopeless, messy, stupid stupid stupid picture for me. I mean, there's no earthly reason for it. Why keep having this guy narrowly avoid death again and again? Nobody notices who watches the film once. Or even ten times.

(Yes, yes I have watched it more than ten times)

There's no PURPOSE to it, and THAT'S what lurks around at the heart of this film that touches me. Somebody (let us assume Mr. Sommers) just put that running gag in the picture because it amused them. And whatever other qualities this film may possess, it at least feels like a film made by people who really WANTED to make it.

It's two o'clock in the morning and I'm only half-way through, and I know this isn't making a lot of sense, but hell. Neither does The Mummy Returns and you sat through that didn't you?

Comments:
Yes, I loved this film to. BUT i loved all the subplots ands and little things. There was not too much action. I also noticed the mook guy avoiding death. Great film :D fun in the sun