This is Sugar Bush Squirrel: 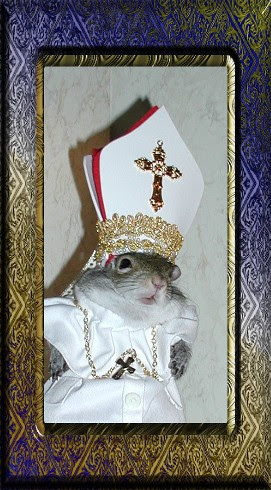 If I had anything clever to add, I would.

But it's a squirrel in a Pope hat. What can you say?

Bruce Lee Statues: For Everyone 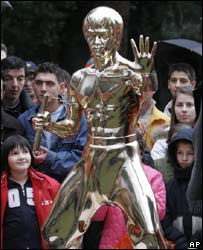 The Bosnian city of Mostar unveiled a bronze (BRONZE!) statue of Bruce Lee as a symbol of the fight against ethnic divisions.

"We will always be Muslims, Serbs or Croats," said Veselin Gatalo of the youth group Urban Movement Mostar.

"But one thing we all have in common is Bruce Lee."

Jane Siberry Is Cooler Than You

But I don't have to tell you that, right? Cause you already know. But maybe you didn't know that brilliant, uber-cool Jane is now selling mp3's online at her store. Plain old mp3's, no DRM here. And the pricing is interesting: Pay What You Like. Yep. If you want to take it all for free, you can. You can even "pay later" so after you've listened for a while if you feel like going back and topping up, you can.

THIS is where the music industry is heading, and the sooner the RIAA realises it, the happier we'll all be.

Here's Where I Work

One of my co-workers has put up a webcam looking out our windows at Burrard Inlet. You can see the container docks and the heliport just past the rail yards, and beyond the Coast Mountains.

Another thirty degrees to the right you get a spectacular view of Mount Baker. Trust me, it's amazing.

Somedays I love the Japanese

An Alphabet of Cinema

That is the final review of the project I started way back with Akira. I intended to write a comment on one film on my shelf for each letter of the alphabet. And we have done so. Here's the full list:

So now I'm done. Guess I'll have to find something else to talk about. Or else do it all over again. That'll mean buying another film that starts with "Z" before I get to the end, I guess.

Strange questions come to mind when watching Peter Greenaway's savage and delicate lyric on the nature of death (and therefore, life) that is A Zed and Two Noughts.

Alba asks the very pertinent question: "How much of oneself can a person lose and still recognize themselves?" In her case the losses are physical and dramatic, but looked at another way, we're all losing parts of ourselves all the time. I think that's one of the things Greenaway is suggesting in associating Alba with Oliver and Oswald; the men have also lost crucial parts of themselves, and their ever-more-frantic efforts to re-establish the identity they once possessed leads inexorably to decay.

What alternatives did they have, though? Or, why is it so important to recognize ourselves? Perhaps that need lies at Oswald's (or is it Oliver's) quest to understand the history of life as a deterministic process leading to his wife's death.

What's Vermeer got to do with it all, anyway? I'm no art historian, and I'm lazy, so I can't bring much Vermeerish knowledge to the question. But painting is always a means of freezing a moment in time, of announcing that this moment, this spot, this direction of view is IMPORTANT somehow. Van Meegeren, however, is obsessed not with reproducing the world he sees, but the world Vermeer saw. Is this just another expression of the drive to avoid decay? Artist seeking immortality -- and yet Van Meegeren ISN'T seeking immortality, is he? He's not painting under his own name -- he's painting as Vermeer. He is putting aside his own immortality in order to subsume himself into another's.

And yet, he believes that Milo's child is his. As does Van Hoyten, the foul cynic. Can they both be right? Or are they, like Oswald and Oliver, struggling, desperate to cling to something they themselves cannot identify or discuss.

What's the purpose of our struggling, our suffering, our urgency to live? There's a lot of urgency in this film, but it's a mindless, helpless sort of urgency, as single-celled organisms (and later, more complex beings, including grief-stricken zoologists) thrive and multiply. Is there any direction here, except towards entropy and irrelevance?

Loss and emptiness echo through the film, juxtaposed with frenetic action and striking contrasts (a white animal with black stripes, or a black animal with white stripes?). One of the great triumphs of A Zed and Two Noughts is how it resists purely story-focused analysis. The viewer is compelled to submit to a visual and auditory understanding that the story itself cannot encompass. Michael Nyman's tremendous score and the gorgeous photography of Sacha Vierny entrance us and carry us through to the film's shocking, hilarious, inevitable conclusion.

Summarizing this film is an exercise in futility. "What happens" here is far less important than what we see. What we hear. What we feel. Digust and arousal and sympathy and wonder.

It's as though the elements of plot and story are being exposed as the same sort of frantic, meaningless activity as those jumbled protozoa, those confused black/white/black animals, those teeming swarms of maggots and snails, and even those zoologists take desperate part in every day in the history of this little earth of ours. Perhaps Greenaway is asking us to consider that there is indeed something beyond that endless struggle: What we see. What we hear. What we feel.

Mission NOT From God

The opening shot of Kurosawa's Yojimbo (you knew I was getting to Kurosawa eventually, didn't you?): distant mountains, snow-covered and majestic. And then Mifune walks into frame, massive and dark, dwarfing the mountains. This nameless samurai is bigger than the world he inhabits. The question for Yojimbo is, does he represent us or does he represent a force beyond what any of us can manifest? Are we bigger, can we be bigger, than the worlds we inhabit?

Soon after his arrival the samurai remarks that "This town is full of people who are better off dead." The casual assertion of moral judgement is a startling one, and one could be tempted into reading that this suggests the samurai is a super-human force of retribution. He's bigger than us. WE would never say this, or if we would, we'd certainly risk a hubris-based fall from grace. Deciding who is or isn't better off dead is a problem we prefer to leave to God.

Tolkien illustrates that point of view when he has Gandalf tell us that, "Even the very wise cannot see all ends." Tolkien's worldview requires a God who alone possesses the capacity for moral judgement, and to whose authority we all must submit. Kurosawa, ever the humanist, rejects this idea, as Yojimbo will ultimately show. The samurai is human. He is not God, and he is not bigger than us, even if we are the innkeeper, and his outrageous willingness to sit in judgement on his fellow man is only a more extreme version of the moral decision-making we are all faced with daily.

Every day, we make moral decisions. The young man at the beginning, desperate for an exciting life, his father, furious at what's happening to his town, and the mother, resigned to her fate -- all these people are making moral decisions. On what grounds do they make those decisions? From where do they receive their guidance?

Not from God, surely. Not in Kurosawa's world, anyway.

The only difference between the samurai and the innkeeper is the willingness (indeed, the eagerness) of the samurai to come to grips with the implications of his moral decisions. The innkeeper, at first horrified, comes to realise that his dour guest is actually the most rigourously, courageously moral character in the whole story. Only he recognizes that his moral choices are entirely his own responsibility.

Of course the samurai "succeeds" in the end because his skills are so spectacular. In this regard, he is not one of us, and the easy reading of Yojimbo is to suggest that he is allowed to make his moral judgements because he is clearly so much superior to all those around him. That the answer to our questions is that he does NOT represent us. He is beyond us. But that's too easy. Too easy for Kurosawa, and too easy for Mifune.

The bad guys are vanquished by his skills, to be sure, but the good guys are transformed by something else. By witnessing the samurai's willingness to endure the consequences of what he has wrought. Never asking to be judged sympathetically, he is recognized as a hero by the very act that dooms him to torture and suffering. And by going stoically to his doom, making no effort to sell out those who betrayed him, he demonstrates exactly the quality that inspires the innkeeper to risk himself for the cause of doing right.

And, in the very end, it is the innkeeper's stoicism and willingness to endure that inspires the cowardly cooper to take his first steps into serving something greater than himself.

The samurai is NOT bigger than us. Not in any meaningful way. Sure he's luckier, and sure he can hit a tumbling leaf with a thrown knife. But these are just decorations, just as much as those pretty mountains in the beginning. What really matters are people. We are bigger than the mountains.

The next EN-MiniGames release is well down the pipeline, and I can at last reveal the secret: Epic-level rules for d20 Modern, right to you. Play characters like Doc Savage, Sherlock Holmes, or Captain Nemo. d20 Modern goes without limits, without ending. We call it

And we're pretty sure you're going to like it. Watch this space for more details.

If you follow Boing Boing you've already seen this, but if you haven't, HOLY CRAP.

140 miles per hour through the streets of Paris.

Fuck you, John Frankenheimer. Fuck you very much.

I'm still struggling to find words to express How Cool This Is.

Insane people with kids' records. I want to give these to my nephews.

Gee, I wonder why CD sales are drying up?

I know it's been stupidly long and right now I'm sleepy anyway so shouldn't even be writing, but I did want to mention that if you want copies of With A Bullet or The Basement of Doom (the supplemental adventures for our last two mini-games), you can download them for FREE from the EN World Game Store.

So what are you waiting for?