One of the things I can remember learning first from Sugino Sensei was how to bow properly at the start of a session of Katori Shinto Ryu practice. It's a very distinctive ritual: from seiza, one bows twice, then claps one's hands twice, then bows once. I am not the sort of person who asks for explanations, so I never asked why we bow in such a fashion. I have heard that it is a Shinto practice whereby the clapping is symbolic of awakening the god, but I don't know that this is the truth. What I do know is what I have come to experience after years of performing this tiny little act day in and day out: connected.

When people arrive for class, they have not yet shed their individual needs and fears. They bring their anxieties and the business of their lives into the dojo and onto the mat. They are not joined into one group with a shared purpose.

Becoming a community of mutual purpose is what the opening bow is all about. We line up together, and we demonstrate our willingness to humble ourselves. Doing it twice makes sure that it wasn't a mistake. That it wasn't done casually, or without thought for the meaning of the act.

When we clap, we are acting in concert, with immediate feedback as to how united we are. There should be only a single sound each time as every pair of hands comes together simultaneously. At least, when I hear that, I feel a lightness inside myself and I can't help but smile at the feeling of connectedness that fills me at that moment.

It's a lovely reminder of how we should practice Katori throughout the session -- connected to each other, fully engaged and responsive to our partner, our instructors and our fellow students. We need to pay attention to the full reality that emerges before us, and we need to allow our responses to that reality to emerge naturally and completely, without hesitation or preconception.

And each time when we open practice I get another reminder of all that, in one quick sharp sound we all share. 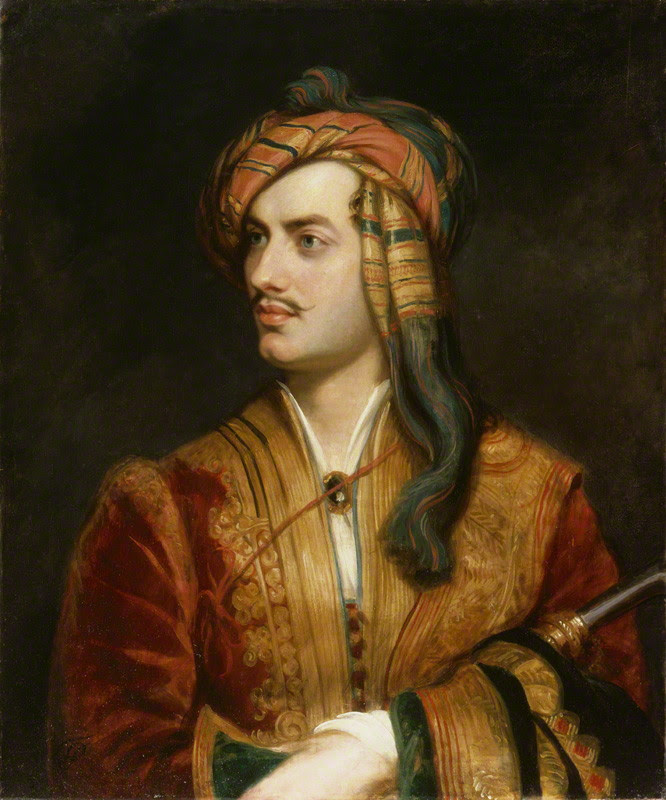 I've been rereading an old treasure from our bookshelf: a collection of Byron's letters that S gave me when I went off to Japan. I have been a Byronophile (Byrophiliac?) since my university days, and the older I get and the more about him I understand, the better I like the man.

His letters are some of his best writing. Condensed narratives and scenes from his often hilarious, often tragic life. His heartbreaking letters to his estranged wife contrast sharply with his uproarious tales of life in Venice. It's hard to select passages because as always with Byron, context is so important. He is not a writer of pithy remarks and self-contained couplets but rather a sprawling, ungainly teller of tales who plays on the ongoing context of his works. But reading his letters in a sustained period builds up a very satisfying view of the man. And he never fails to surprise.

This collection is some 800 pages or so, and even at that is but a fraction of Lord Byron's total correspondence. There's an edition of Byron's Letters and Journals that is perhaps more complete: it's published in TWELVE VOLUMES -- and that's only considering his side of the story. Include all the letters others wrote TO him, and there are thousands upon thousands of pages of what is, essentially, data. Data about Lord Byron and those he spoke to, and of.

It's a vast amount of information. Staggering.

And yet there remain so many mysteries about the man. Who he was and what his opinions TRULY were on so many subjects. His writings are filled with contradictions and controversies, with such sly twists of meaning, that people still argue over some of the most basic facts of his life and personality. Was he a sexist monster? A romantic knocked about by the world or a cynical manipulator of public opinion?

All of which puts me in mind of Charles' Stross' astonishing book Accelerando. One of the conceits of this book is the idea that we will, in the not too distant future, find a way of codifying and storing personality. Which is the real key to immortality, of course. Once we know how to record and store a person's character intact (I should think a non-lossy format will be required here), then we can pull them up at any time and they live again. Which I guess means turning off the computer is a form of murder, but fortunately a reversible one. Keep backups.

But is this feasible? Is it reasonable to suggest that there will EVER be enough data to record a person so thoroughly that we recognize a manifestation of them as THEM? Look at the vast amount of data we have on a character like George Gordon, Lord Byron, and consider how feeble our ability to truly understand him is. How much more data will be required to have a definitive recording of a human being's personality?

Perhaps I'm just a Luddite on this issue. But the essential unknowableness is important to me. A friend recently asked for help in dealing with people suffering personality disorders: he found these people so perfectly predictable that it actually became hard to see them as human beings, rather than just objects in the world he could manipulate. We discussed the need in all of us to maintain the awareness that ALL people are capable of surprising us, no matter how many times in the past they may have played right into our expectations.

Heck, DOGS can surprise the most experienced trainers -- how can we imagine that people can be perfectly recorded and duplicated?

As for Lord Byron, people keep trying to reproduce him. I recently read John Crowley's The Evening Land, which purports to be a novel written by Byron. It was a healthy effort, and yet it did not convince in the end. Byron is dead, and he will never be among us again. All we have are the words he left behind, but these must be a pale shadow of the man that was.

But damn, he writes a great letter.

Come on. When a giant robot gets all cranky, it's comedy.

The SLAVE QUEEN for DINO-PIRATES

THE SLAVE QUEEN OF THE RUINED CITY

These rules feature all-new variations on skills like Diplomacy and Intimidate, a revised, streamlined damage system, and completely revamped systems for Reputation, supernatural powers and Recovery. This hard work has been done mostly by the amazing group over at the True20 forums, whose creativity and intelligence has made an already great game even better. It's been inspiring working with that crew, and the game wouldn't be half as cool as it is without their efforts.

The SLAVE QUEEN OF THE RUINED CITY has been run at numerous events, in cities around North America, and it's never failed to provide a great afternoon's entertainment. This package includes maps, sample characters, handouts -- along with the online rules it's everything you need to start playing DINO-PIRATES OF NINJA ISLAND.

Well, except for some friends. You have to provide those yourself.

Okay, I don't know what Slagsmålsklubben means (although I suspect it's the name of a band), but it's my favourite new word. And this video is even more clever and charming than you think it's going to be when it starts.