Ada Lovelace Day is being established, and I think it's a lovely holiday to observe. I wrote a brief post on the FreshBooks blog for it, as hundreds if not thousands of people read that blog, and I think perhaps three people read this one, so it seemed the right choice.

But Ada and I go back a ways. See, Ada Lovelace is not only the First Lady of Computing (if you didn't know that, then you probably didn't know about Ada Lovelace day in the first place, so that's TWO things you've learned today. No, no, just doing my job, here), she's also the only legitimate daughter of the infamous Lord Byron, the original rock star. Byron pretty much invented the whole idea of celebrity — of being famous primarily for being famous.

Of course, Byron is a great writer, one of the best for my money, and his great work, Don Juan, is a masterpiece of rhyme and meter, but to be honest, in the early 1800's, when EVERYONE in Europe knew who he was, and ladies were fainting when he walked into salons, most of the people who knew him probably hadn't read much of his poetry. He was famous for being LORD BYRON.

Now I'm an open and ardent admirer of Byron's. So much so that when I went off to Japan, I took with me Steph's going-away-but-soon-to-be-reunited present: Byron's letters (well, a good few hundred of them, anyway), in a massive volume that offered them as a sort of autobiography. Many of them are hilariously delightful, as much for what he DOESN'T say as for what he does. So I've invested in my Byronophilia. I'm no expert, but I get by. I do get a charge out of software developers sending me his verses — FreshBooks has a clause in its software developer job posting saying that anyone who includes a verse of ottava rima with their application will get it reviewed by me personally. Entirely true, by the way, and since Byron is easily the dominant practitioner of the form in English, I get several verses of his poetry every week.

Usually the same verses, but what can you do? It's still funny stuff.

So ANYWAY, poor Ada grew up in her infamous father's shadow, though she never met him as an adult. But she certainly lived up to his celebrity fame — not with any real celebrity of her own, but with full-on accomplishment. 165 years ago Ada Lovelace wrote the very first computer program in history. She's the Queen of the Nerds. Mother Geek. The Ur-BOFH.

And yet, until 1953, she'd been pretty much entirely forgotten. The sad fate of celebrity kids, I guess — all anyone wants to know about you is what you know about dear old Dad, and since Ada had nothing to say about her notorious sire, I guess she vanished from history. Until somebody published her translation of an Italian article on Charles Babbage's mad scheme to build an Analytical Engine, and it turned out that in her notes (which are considerably longer than the article itself) she wrote out the instructions of how one would set up the non-existent Engine so as to calculate the set of Bernoulli numbers. She also wrote some fantastically perceptive comments on what Babbage's invention really meant:

In enabling mechanism to combine together general symbols in successions of unlimited variety and extent, a uniting link is established between the operations of matter and the abstract mental processes of the most abstract branch of mathematical science. A new, a vast, and a powerful language is developed for the future use of analysis, in which to wield its truths so that these may become of more speedy and accurate practical application for the purposes of mankind than the means hitherto in our possession have rendered possible. Thus not only the mental and the material, but the theoretical and the practical in the mathematical world, are brought into more intimate and effective connexion with each other.

But she's seeing that the software/hardware divide (which in 1843 was pretty much human brains on one side, and the rest of the universe on the other) was closing. She was looking down a very very long road and seeing, dimly perhaps, but still, seeing where it led.

We may consider the engine as the material and mechanical representative of analysis, and that our actual working powers in this department of human study will be enabled more effectually than heretofore to keep pace with our theoretical knowledge of its principles and laws, through the complete control which the engine gives us over the executive manipulation of algebraical and numerical symbols.

Keeping pace with our theoretical knowledge — I find this a fascinating way to look at the Information Revolution. We are nearing the point at which one person needs only to imagine something for it to be brought into being. The big problems nowadays in software seem to be largely design problems — which are problems with refining the idea, rather than manufacturing its "material and mechanical representative".

The imagination at work here is fearsome. In another part of the article she imagined that such devices could be programmed to create music! In 1843! No wonder Babbage called her the "Enchantress of Numbers". She was even able to foresee the immense value present in software development:

We have undoubtedly to lay out a certain capital of analytical labour in one particular line; but this is in order that the engine may bring us in a much larger return in another line.

I've been in the software business for over a decade now, and this is a pretty good summation of exactly what this nutty business is all about. Reading Ada's writing, I find it easy to imagine that she would see the necessary progression from the punch cards and rotating drums of Babbage's mad machine to agile methodologies, web frameworks and object-oriented design. She was 28 years old when she wrote that article, and dead less than ten years later, largely unheralded and forgotten until a hundred years later when her article was republished.

How strange that, given my long-standing infatuation with Lord Byron, I find myself spending years in the field created and defined by his daughter. My thanks to the Finding Ada project for bringing all this to my awareness. I think it's quite appropriate to have a day celebrating the birth of the Information Revolution. All we need now are some Hallmark cards.

Okay, okay, I'm late to the table here but HOLY CRAP THIS IS AMAZING. The name is Kutiman. He builds music out of YouTube clips. Beautiful, inspiring music. And videos to go along with them -- videos that actually ARE the music itself.

I don't think I've been this excited about new music since Portishead appeared out of nowhere and kicked my butt way back in Funabashi. There's so much delight and wit in here, married with such a lovely appreciation and respect for the glorious generosity (inspired by narcissism, perhaps, but there you go) of the goofy human spirit. I remember the first time I heard Coldcut's "Say Kids What Time Is It?" -- this is the same energy, the same determination to build greatness where nobody else saw it. This is what art is all about.

Thanks, Trill, for the find.

So spring has come,
Oh Jesus,
not again.
The cold has sunk too deep; too frozen now
the furrows of my heart; for any plow
would splinter here;
this chill-swept, dark terrain.
No, not for me;
this year, let me abstain.
Let wither further, wither all, allow
cold, stiff corrosion to gnaw at every vow.
Numb every oath, let nothing pure remain.
The only purity
is purity of ice,
for spring's encroachment on the land
brings but a new,
capricious tyranny.
Each year this joke gets harder to withstand:
that leaves sprout new, that swallows come on wing,
that mourners laugh, that winter
melts to
spring.

I still think this is the best thing I've ever written. Originally published in the Filling station calendar way back in, uh, '96 or so, I think. There is one defective line metrically (though I think it's a defensible variation) in the poem: a year's subscription FOR FREE to anyone who can point it out.

Photo by He and Fi. 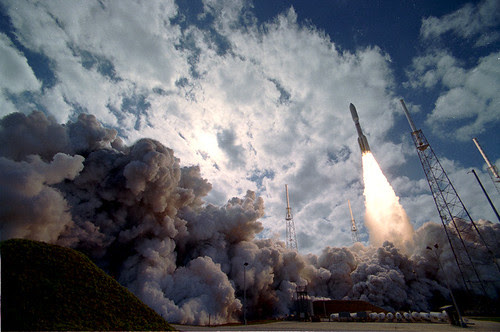 There's things I need to do more of, things I hope to do less of. Habits I need to acquire, habits I need to break. My life has been a steady (if not always directed) process of transformation, and yet so many of the things I do every day are things I have done since I was child. Habits learned long ago and trusted now despite all evidence to suggest they are neither healthy nor helpful.

I guess that's one of the things I like about swordfighting. It is entirely about learning new habits and letting go of old ones, and offers the hope that if we can change our habits in this odd little sphere, perhaps there's the possibility of changing them in other, wider spheres. The lesson of Katori practice, however, is that the process of changing one's habits is slow, frustrating and resistant to logic. You can't argue yourself out of your habits. You can't just decide to take on new ones. You have to PRACTICE.

Art works the same way. I write and I write, and I hope to god I'm getting better, but I'm not sure I am. I came across a story I'd written back in, oh, probably Grade Three or so. It read pretty much the same as how I write today. Same turns of phrase, same sentence structure, same obsessions I have now. Same rip-offs of the same writers I'm still ripping off today. Writing is a habit. Practice, practice, practice.

What about leading, though? Is being a leader a question of the right habits? I THINK so. I think being an effective leader (and there are as many ways to do that as there are to be a great manager, writer or swordsman, I'd say) is about acquiring the habits of taking action. Seeing a gap and dreaming of what might fill it. Putting aside that fear of doing the WRONG thing and replacing it with the fear of doing NOTHING.

I need to expand my horizons. Indeed, my parameters. It seems like I'm always doing that, but I guess I am, so I guess it should seem so. Otherwise I guess I just remain a sucker MC amateur. Practice, practice, practice.